The premier class of motorcycle road racing events that take place on road circuits are known as the Grand Prix motorcycle racing. Federation Internationale de Motorcyclisme (FIM) sanctions the events which started its journey for the first time, back in 1949. Official stats suggest that the championship has a direct audience of 2 and a half million. However, the overall online engagement involves as many as 340 million followers across the planet. In this article, we will discuss how and where to watch MotoGP Live on US TV. MOTOGP TV SCHEDULE.

Where to watch MotoGP Live on US TV?

CNBC will broadcast the race from the Catalunya Grand Prix as a same-day delayed coverage in the US. All the sessions will be shown live through the MotoGP Video Pass. While BT Sport 2 will show the entire action live in the UK. Hence, US-based viewers can catch the coverage live using the VPN. The main race will begin on Sunday, 29th May at 8 am ET.

How to Catch MotoGP Whole Season Live on US TV?

NBC Sports is the broadcasting home of the MotoGP World Championship races in the United States. The popular sports network group made a multi-year deal with the authority which will see them replacing beIN SPORTS as the TV broadcasting rightsholder of the events. Viewers can enjoy all the races through the network channels. 5 of those races will be shown on NBC while the other 16 will be televised through CNBC. But if someone wants to watch every session from every race live, then he must subscribe to MotoGP Video Pass. The service offers both monthly as well as annual plans. The monthly plan is available at only 35.75 USD (€29.99). While one can also guarantee himself all the races live throughout the campaign by subscribing to the annual plan which is available at just 166.87 US Dollars (€139.99). MOTOGP 2022 STREAMING GUIDE.

Flagship NBC Network will televise all races with just five of them live. The other races will be televised as tape-delayed, on the very same day but a few hours later. The network’s pay channel, NBCSN which used to televise all the other races has been shut down. UK audiences can watch this biggest motorcycle race event on BT Sport. Hope the discussion has answered you properly about where to watch MotoGP Live on US TV.

How to watch MotoGP in the UK?

Apart from answering where to watch MotoGP Live on US TV, we will also reveal to you the MotoGP broadcasters in the UK.  BT Sports channels (mainly BT Sport 2)will live coverage of all MotoGP events in the United Kingdom.

How Can I Stream MotoGP Championship Live Via Online Streaming in the USA? 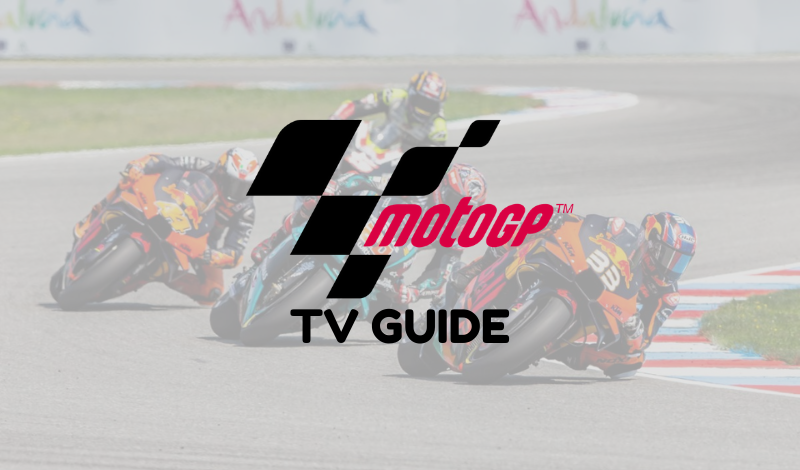 Are you a diehard MotoGP fan? Do you feel unsatisfied with just 5 races shown live on the NBC Sports Network? Well, we’ve got a proper solution for you. Viewers can enjoy all the MotoGP races including all the sessions of those races live and on-demand through MotoGP VideoPass. Undoubtedly, this is the best way to enjoy MotoGP races live. The features of the MotoGP VideoPass include:

The most popular American motorcycle racing series sanctioned by American Motorcyclist Association (AMA) is known as the American Flat Track. NBC Sports is the exclusive television broadcasting partner of the series within the USA. However, the popular television channel doesn’t televise live coverage. Rather it airs one-hour coverage of all the 18 rounds as the delayed coverage. However, the live-action is available through the following services:

The NBC Sports Gold TrackPass features live streaming of all the American Flat Track events. The service doesn’t demand any cable TV subscription. The entire package includes grassroots racing and high-speed actions from ARCA, IMSA, NASCAR, and plenty more along with all the AFT events. Subscribers will have to pay 4.99 US Dollars to purchase the monthly plan of the entire package. However, the package also has an annual plan which charges 44.99 US dollars. The service also provides free trial opportunities periodically, which lets potential new subscribers enjoy many past highlights and content completely free.

If you are only an AFT fan and the subscription fee of the TrackPass seems a bit costly for you, then you can simply go for the AFT package. This package excludes all other sporting events of the TrackPass but will be enough to provide you with a live stream of all the American Flat Track events. The introductory rate has been set for the package by the authority in 2020. The monthly subscription fee of the package is as less as 1.99 US Dollars while the yearly plan makes the subscribers pay 10.99 US Dollars. AFT package is very much cheap and is the perfect platform for American Flat Track-loving fans within the country.

Apart from these, NBC also televises delayed coverage of Superbike World Championship races in the United States. In 2020, the channel has shown 7 races from the SBK Championship.